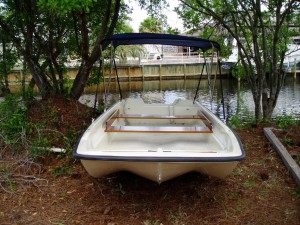 1954 Dick Fisher, a Harvard graduate, read an article on a brand new type of material called polyurethane foam.  He likened it to synthetic balsa wood because of its stiffness and light weight.  It was also very buoyant.  Mr. Fisher had been toying with the idea of building light weight boats for some time and the introduction of this light weight foam opened up some opportunities.   Fisher first built a small sailing dinghy using the foam covered with a fiberglass skin.  His goal was to build small sailboats that would compete with the Alcort Sunfish later to become the AMF Sunfish.

Mr. Fisher showed the boat to his friend Ray Hunt a naval architect. Mr. Hunt was very impressed with the fiberglass over foam concept.  However, he felt that the small sailing dinghy market would be limited and suggested that they build motor boats or skiffs.  Using some ideas based on a Nova Scotian boat called a Sea Sled, Hunt drew out a hull design and presented it to Dick Fisher.  Fisher built a prototype and began testing the little craft.  Initial designs suffered from cavitation so the design was slowly altered until this problem was resolved.  Fisher presented the modified prototype to Hunt who then redesigned the hull.  Another prototype was built and tested.  The boat was found to be very wet in choppy seas so the mold was redesigned to create more of a V in the hull thus solving the problem.  Based upon this final design the Boston Whaler 13 went into production in 1958.

The little boat was unique, incredibly seaworthy and could carry a heavy load.  Because it was so light, a small outboard was all it took to push it along.  The dual hull design made it so that the inner hull was actually above the waterline.  This meant that the boat could actually be moored with the plug out and rain water would simply run out the back.  Also, the production technique allowed for all compartments and hull components to be designed into the mold instead of having to be added later.  All of this made for a very cost effective manufacturing process.  From 1958 to 1961 the 13 foot model was all that the company produced.  In 1961 the 16 foot model was introduced.  This model was replaced by the 17 foot model  in 1976.

The company has had several owners.  In 1969 the company was s 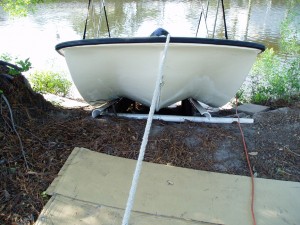 old to the CML Group.  Mr Fisher stayed on as a consultant until 1972. Under CML the company flourished and many new models were added.  During this period sales skyrocketed and more models were added. In 1970 the 21 foot Outrage came out and in 1972 the 19 foot Outrage was introduced. In 1973 the first 21 foot Revenge model appeared.  Also, in 1974 the inboard/outboard Revenge and Outrage models were made. In 1975 the 15-foot hull was added and in 1976 the popular 17 foot model was created. Many other models and improvement continued throughout the 1970’s.  This was a good time for the flourishing boat company.  It seemed as though everyone had to have a Whaler.  The best Whalers are said to be the 80’s models.

In 1989 the company was purchased by Reebok.  That’s right.  The shoe company.  The era of expansion and improvement came to a screeching halt.  The classic hulls were still made but new designs came out and the company spent a great deal of effort marketing the new designs.  Customers were resistant to the new designs and this coupled with the recession of the 90s took a toll on the company.  At the end of 1993 Reebok sold the company at a 25 million dollar loss to Meridian Sports.

Meridian Sports also owned Master Craft boats which was a very popular ski boat at the time.  Meridian owned Boston Whaler from 1994 – 1996 and did poorly with the company.  Two models from the Fisher era, the 13 and17 and two models from the CML era the 19 and 27 were produced.  To cut costs Meridian moved all operations to Edgewater Florida where they remain today.

In 1996 the company was purchased by Brunswick who also owned Mercury Motors and Sea Ray Boats.  Bruswick paid a mere 27 million for the entire company.  To give you an idea of how cheap this was consider that Bruswick paid 110 million for Igloo Coolers and 425 million for Sea Ray Boats. (10 years earlier)  You may recall that Boston Whalers started to show up on showroom floors equipped with Mercury outboards.  That is around the time Bruswick purchased the company.  Overall, Brunswick has done a good job with the company.  They run multiple shifts at the main plant to keep up with demand.  The only classic design left is the 11 foot model.  All other models have been redesigned but still have that original look to them.  They also continue to be unsinkable just like the original.